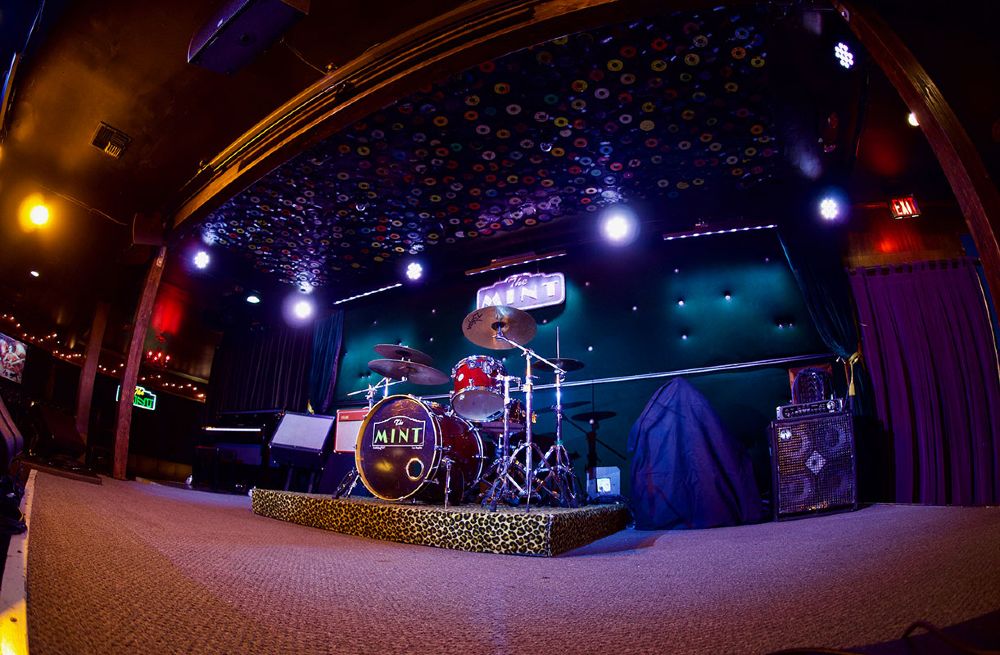 The Mint is one of the greatest, most historic clubs in LA. They’re also a Gigmor favorite and have been booking with us for years. Take a look at this feature that Chris Morris wrote back in August of 2007. Also, be sure to check The Mint’s open gigs and apply to get booked!

Live music venues manage to keep their doors open for years on the Strip in Hollywood, but the clubs off the main drag in Los Angeles tend to come and go. A post office now stands on the site of the Parisian Room, the great old jazz nightspot that operated for years at La Brea and Washington. The Music Machine, a big room that hosted everything from blues bands to thrash metal during the ’80s at its Pico Boulevard location in West L.A., is an electrical supply wholesaler these days. Club 88, a classic ’80s punk rock dive on Pico near Barrington, is currently a restaurant, as is the nearby, fondly-remembered Alligator Lounge.

Yet The Mint has endured. Located at 6010 W. Pico just east of Crescent Heights Boulevard, it is celebrating its 70th year in business in 2007. The Mint’s early endeavors in music are lost to history. We do know that it played host to live acts as long ago as the 1950s; a vendor who sold janitorial supplies to the club back in the ’80s said one of his relatives, the noted blues guitarist Pee Wee Crayton, performed there.

It wasn’t the joint that would be considered most likely to become a long-running Los Angeles musical institution. When musician Jed Ojeda started renting out the club for party gigs by his blues band the Drive-By Shooters in the mid-1980s, the Mint was a mere 1,000 square feet. It was a long shotgun-style room, with a bar lining the western wall and a narrow ledge on the eastern wall where customers could perch their drinks (and, sometimes, themselves). You had to maneuver around the crowded space in front of the small bandstand to get to the restrooms at the back of the club. For a time, a gigantic portrait of the venerated bluesman Big Joe Turner beamed down at from one wall.

But it was a comfy place, as down-home and funky as the music Ojeda brought in the room, and people dug it. In 1990, he acquired the club, outbidding another prospective owner who wanted to turn it into a lesbian bar. It quickly became a mid-city home for the blues performers who made the majority of their living playing the South Central club circuit. Smokey Wilson (whose band members included Ojeda), the King Brothers, Guitar Shorty, Arthur Adams, Louisiana Red, and the vocal team of Bobby King & Terry Evans (veterans of Ry Cooder’s group) all gigged regularly at the Mint, which booked live music seven nights a week.

Live Music Near You