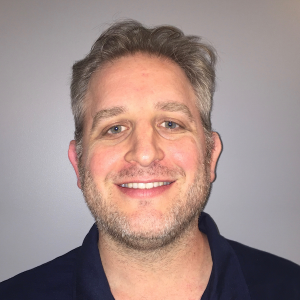 Steven has a long and impressive track record building and managing music and entertainment-oriented web and mobile properties and is the perfect technology leader to spearhead the development of Gigmor’s live music marketplace.

Steven is the former CTO at EarDish, a revolutionary music platform for indie musicians. Previously, he was Director of Technology at Fox Interactive Media where he developed the highly innovative American Idol website, among other Fox properties.

In addition to his impressive technology background, Steven brings a strong philosophy on the importance of company culture, product methodology and an unswerving focus on the needs of the customer. He’s also a talented musician and songwriter, an avid reader and a big sports fan. 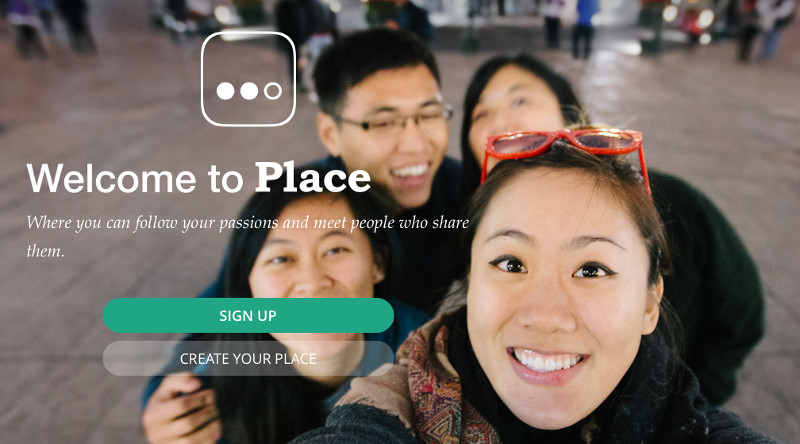 This article regarding investing in startups originally appeared in the San Francisco Chronicle on July 6, 2015.

The Oculus Rift, a virtual reality headset, was the talk of tech when it raised a whopping $2.4 million from more than 9,000 backers on Kickstarter. But when Facebook acquired the company for $2 billion last year, its funder fan base got nothing.

“I think I would have rather bought a few shares of Oculus rather than my now worthless $300 obsolete VR headset,” one backer wrote following the acquisition.

But under rules issued by the Securities and Exchange Commission, more startups are expected to raise money through equity crowdfunding, an alternative to venture capital that means regular people — like those who might donate cash to a company through Kickstarter — as well as accredited investors can get equity when they back startups.

“Finally, the average person has the opportunity to get in on the next big thing, because previously only very rich people had the opportunity to invest in, say, Facebook before it went public,” said Ron Miller, chief executive officer of StartEngine, a Los Angeles accelerator that’s helping companies raise money through equity crowdfunding.

Under Regulation A-plus, part of the 2012 federal Jobs Act, companies can raise up to $20 million per year in a first-tier offering or up to $50 million per year in a second-tier offering (which requires more disclosures). Companies that raise more than $20 million would not have to register in every state that they intend to issue securities, said John Sabl, a partner in Sidley Austin LLP’s corporate and securities practice group.

Normally, small businesses grow using loans from banks or investment from venture capital firms. Equity crowdfunding could be especially helpful for companies looking to raise, for example, less than $50 million from a large group of supporters. It’s also particularly viable for small companies that have a big fan base, Miller said. Sabl predicts companies in sectors that have seen small registered public offerings in recent years — such as biotech and medical devices — could do well.

But such crowdfunding isn’t a good fit for all startups.

“If someone can raise enormous amounts of money privately, I don’t see why they would go through an SEC process to raise $50 million,” Sabl said. It’s unlikely that regular people will have a chance to invest in companies if those companies have no trouble luring venture capitalists — the next Ubers and Snapchats of the world.

A-plus, an update to Regulation A provisions that had capped fundraising at $5 million and were rarely used, took effect June 19. Already, startups say they’ll give it a go.

Gigmor, a Santa Monica startup that uses an algorithm to help compatible musicians find each other online, hopes to raise $1.2 million with the help of StartEngine.

“What appealed to me was access to investors who potentially could appreciate what we were doing, but who didn’t have the same rigid parameters for investment that a lot of venture capitalists do,” said David Baird, chief executive officer of Gigmor.

Companies using Regulation A-plus are pitching to their prospective customers for funding, instead of somebody at a venture firm. Baird sees that as an advantage for Gigmor.

“Anybody in the music business, I’m fond of saying, finishes my sentences for me,” Baird said. “They completely understand the opportunity we’re going after, and just sort of intuitively understand it based on their experience.”

Like traditional crowdfunding, it gives startups a way to make sure there’s a market for their product. Since relatively few startups succeed, funding them is inherently risky. Nonaccredited investors are restricted in the amount they can put in.

“That is the ultimate market validation testing. It’s no longer a guess by a group of individuals … it’s actual market proof, as evidenced by investment in the company itself,” Miller said.

Another way equity crowdfunding differs from traditional venture investment is that, when venture capitalists back a company, their securities are often restricted from an easy sale.

With equity crowdfunding, people who invest in a company can sell their securities in that company the next day, assuming they can find a buyer, said Jason Paltrowitz, executive vice president of corporate services at OTC Markets Group, a New York financial marketplace.

They’ll be able to do so on OTC exchanges, which Paltrowitz says is an advantage to investors and a good way for small companies to learn how to be public companies.

Instead of internal or analysts’ estimates of a company’s worth, “The market will decide what the value of your company is, and your investors want to see it (in) real time,” Paltrowitz said.

Companies that are listed on exchanges will have to make reports to investors at regular intervals, Sabl said. That factor may attract some venture capitalists, too, because it offers a more credible valuation to show limited partners who have entrusted their money.

It’s still unclear whether equity crowdfunding will take off in the U.S., Sabl said: Several factors have bearing on its success. One is the availability of private money, traditionally used to back startups.

“If companies are happy with the capital they can raise today, it’s unlikely they will do a Regulation A offering,” said Thomas Kim, a partner at Sidley Austin who previously worked as chief counsel and associate director of the SEC’s Division of Corporation Finance.

It will also be a matter of how eager investors are to back companies that raise money under the new rule, and how the SEC administers the process.

Gene Fusz, a St. Louis entrepreneur, plans to raise money under the new regulations for Biffle, an online buying club he’s in the process of starting.

He’d planned to raise money the old-fashioned way, but now he hopes to raise $50 million under Regulation A-plus instead.

As he recruits members for the buying club, he sees the new method of crowdfunding as a distinct advantage. Anybody who invests will have a financial stake in seeing the company do well.

“What that means is I’ve (hypothetically) got a million people whose interests are aligned with ours. They’re going to go tell all their friends, they’re going to be evangelists for us,” he said.

How would you like a chance to win a $150 gift certificate to Guitar Center?

Did you get matched with some great musicians on Gigmor? Did you join a band you found through Gigmor? ​Did your band find new band members using Gigmor? ​​Have you used​ Gigmor Jams to host or attend ​a jam session?

T​ell us your Gigmor success story by sending ​us a brief email at info@gigmor.com. Emails must include a valid Gigmor username and must be received by midnight on Sunday, June 14th, in order to be eligible. Winner will be chosen randomly.

We look forward to hearing your success stories!

I can’t tell you how excited we are to announce the launch of Gigmor Jams – an easy way to manage your jam sessions, rehearsals, workshops and auditions within the Gigmor platform.

This is the first step in creating a best-in-class set of band management tools that will help you take your career to the next level!

To start, we’re going to launch in beta in the Los Angeles market. During this 3-4 week period, we’re going to put Gigmor Jams through its paces and fine tune it based on member feedback so we can make sure everyone has a first class experience when we launch it nationally in the U.S. and Canada.

Since this is a new piece of functionality, I wanted to provide a quick “How To Create A Jam” for everyone’s easy reference. It really is super simple – whether you’re creating a Jam on your desktop/laptop or mobile device. It even comes with pictures!

FYI – we’re working on a mobile app so we totally appreciate your patience. It’s coming, we promise!

How To Create A Jam

Log into Gigmor – told you it was easy!
Click ‘Play’ on the Gigmor toolbar at the top.

Hit ‘Continue’ at the bottom of the page.

You’re halfway home. Once you’re done, hit ‘Next’ at the bottom. 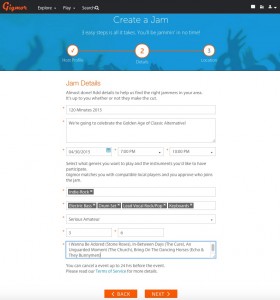 Fill out your ‘Location Details.’ 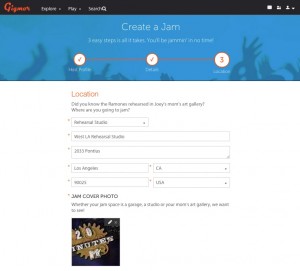 Add in some “Location Characteristics.” In other words, include the information that you feel is important for having a successful Jam. In my case, I’ll provide the PA, the guitar amp – there is parking at the rehearsal studio – and if you like to smoke whatever, I don’t care, but I have sensitive lungs so I prefer to jam without hacking up a lung.

Hit ‘Save’ at the bottom when you’re done. 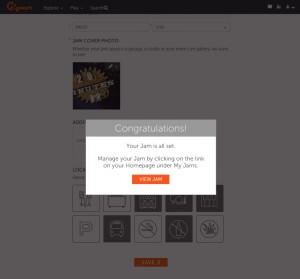 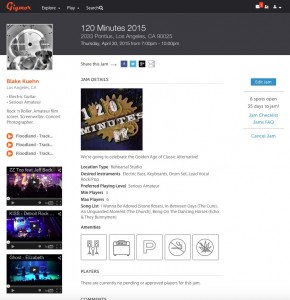 Have fun and if you have any questions or comments, hit us up at jams@gigmor.com!