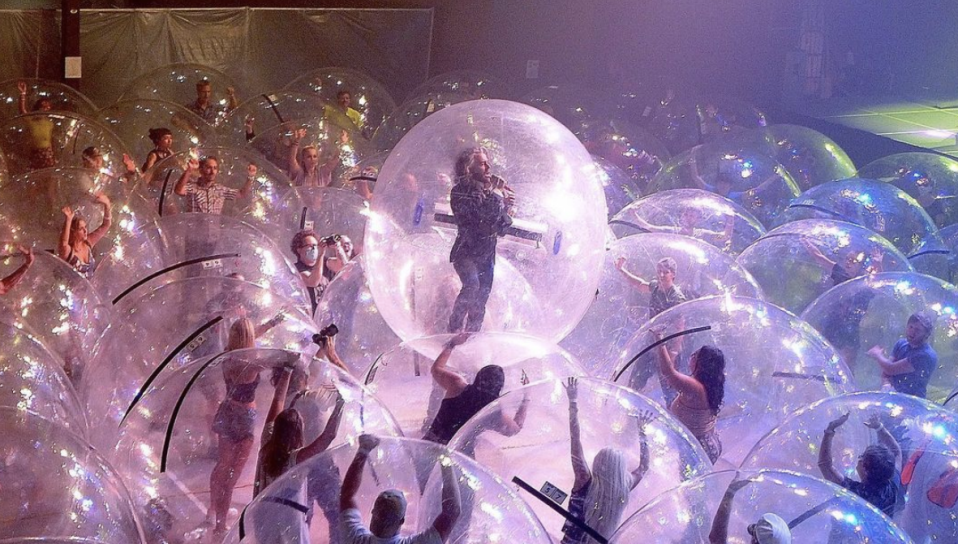 This past weekend, all eyes were on The Flaming Lips as they introduced a rather unconventional strategy of bringing back live music while still following COVID-19 restrictions. The rock band hosted the first ever full-length “space bubble” concert at the Criterion Theatre in Oklahoma, where fans and musicians were confined to huge, plastic, inflatable balls during the performance. The idea originated from front man Wayne Coyne, who has often used a Zorb ball to roll over the audience during the band’s decades of experimental live events. The Flaming Lips have been trying to create a show using this interesting technique for months, debuting the strategy during a one-song performance on The Late Show with Stephen Colbert last June. The Oklahoma City natives originally scheduled this weekend’s two full-length performances for December, but were forced to postpone due to rising COVID-19 cases in Oklahoma after Thanksgiving.

Check out what the fan perspective was like at these revolutionary shows:

In preparation for these shows, the floor of the Criterion was divided into a 10×10 grid, with each square dedicated to a space bubble that could hold up to three fans. Before the performance, audience members climbed into the plastic bubbles, which were then inflated by venue staff using leaf blowers. Once inside, fans could then take off their masks and jump around for at least 70 minutes before the bubbles needed to be unzipped or refilled with clean air. Each bubble was equipped with features to increase the fans’ comfort, including supplemental speakers to prevent sound muffling, water bottles, battery-operated fans, a towel to wipe condensation, and a sign to communicate with venue staff. The sign had two sides, one saying “I gotta pee,” prompting a staff member to help them exit the bubble and safely find the bathroom, and another announcing it’s “hot in here,” requesting a refill on cold air from a leaf blower.

The Flaming Lips played 12 songs in their 90 minute set, featuring both classic tracks and new music from their 2020 album, American Head. The audience happily bounced around and clapped by “punching the top of their bubble” according to cameraman Nathan Poppe, and the venue was filled with cheers when Coyne held up a balloon that said “F*** you COVID19.” The show ended with fans rolling their bubbles towards the exit, where they could re-mask and leave the venue.

Coyne says that the show is easily replicable if artists can find a venue with enough space for attendees to social distance prior to entering the bubbles. However, some professionals are skeptical as to whether the bubbles actually acted as sufficient guards against the transmission of COVID-19, and are cautious of encouraging similar future events. The biggest concern is that the bubbles are not properly ventilated, making them an ineffective preventative measure. Dr. Sandro Galea, Dean of the Boston University School of Public Health, told the New York Times that “in theory, if air filtration is good, protective barriers can helpfully augment and reduce risk of transmission, but I would be hesitant to attend a concert in a bubble at the moment unless this has been assessed further.” Other professionals have also pointed out that there is a risk of dangerously high CO2 levels inside the bubbles.

Despite these concerns, the Flaming Lips still feel that their performances were extremely successful and safe, with Wayne Coyne even suggesting that “space bubble” shows may become the “new normal.” They have repeatedly made it clear that their first priority has always been safety, reassuring fans that attending their concert is “safer than going to the grocery store.”

Who knows, maybe all of our favorite artists will be bouncing around in Zorb balls in a few months – we’ll just have to wait and see.